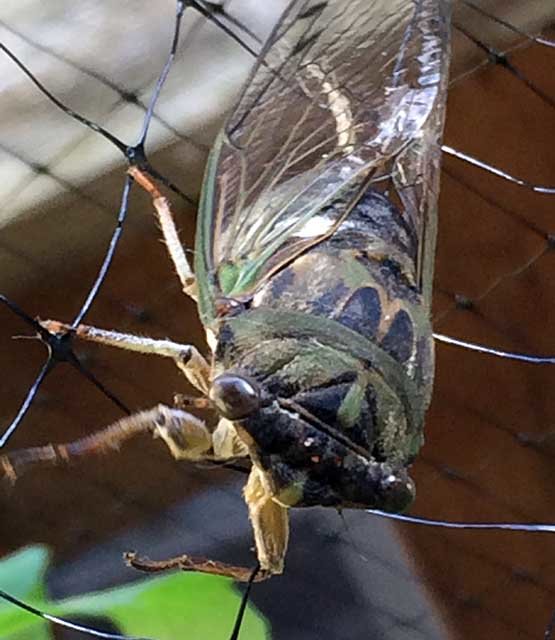 I am looking forward to the moment when cicada season passes so I can hear myself think again. The tree outside my front terrace thrums loudly like a giant, shaking maraca with these screeching bugs who burrow up from their underground lairs during the dog days of summer and rattle their way inside my skull with their relentless, 120-decibel, whirring grind.

Until recently, I knew little about them. I was surprised to learn they’ve been around forever and, at times, have been the stuff of legend, like the time a cicada helped an ancient Greek guitarist win a music competition.

Before I get to that story, some swift facts.   Apparently, there are three kinds of cicadas—the annual, run-of-the-mill summer cicada and its more aged namesake, the 13-year and 17-year cicadas. All of them start out as eggs hatched upon the tippy ends of tree branches. The eggs fall into the ground, where the larvae grow spud-like, underground, feeding on tree sap. The annual cicadas emerge after a two-year stint underground while the periodic cicadas appear in roughly 13 to 17 year cycles, depending on the 2,500 known species worldwide. The 13 and 17 year-cycle cicadas survive by profusion, overwhelming their predators by their sheer number so that enough will remain after dinnertime and the species will survive.

For surrounding wildlife, cicada season is a month-long Carnivale, the equivalent of an all-you-can eat buffet of noisy sliders with wings, no cheese. In the food chain scheme, cicadas are the conduit between trees and fungus, which they consume, and birds and larger four-footed predators, which eat the cicadas. Humans, too, have eaten cicadas for centuries. I will take the research at its word. The males are said to taste nasty and should be avoided. It’s the mute females, stripped of their wings, that are editable, mostly boiled and sometimes, dipped in chocolate. Sans chocolate, they supposedly taste like…asparagus. Ha! You thought I was going to say ch’kn, right? And cicadas apparently have as much protein, by weight, as…beef. There are caveats, though. If you’re watching dietary levels of mercury or are allergic to shellfish, then skip any cicada chow.

Their loud (at this moment, nearly unbearable) chirping is a death knell–they have only weeks to live.   Weather folklore has it that the sound of the cicada heralds the arrival of the first frost to come in six weeks, a bit of poetry in these bugs that resurrect themselves from underground to announce the forthcoming harvest season and close of yet another year.

Before they go, there is the noise. While summer temperatures can be gauged by counting the number of cricket chirps in fifteen seconds and then adding the figure of 37 to arrive at the approximate Fahrenheit temperature, the shrilly decibels of the cicadas’ bird-deterring mating call requires no math, as their singing generally marks the hottest portions of the day within a 24-hour cycle. It’s recommended that you use power tools at dawn or dusk or else female cicadas will swarm you under the mistaken notion that you are the King Crooner on the block.

How do cicadas make such a racket? The cicada’s call comes specifically from a gilled structure in their exoskeleton, located near the cicada’s wing, called a tymbal. The cicada collapses its ribs to create approximately 300 clicks per second, which are amplified by its hollow abdomen to a sound level that can be heard from at least a mile away.

Interestingly, the U.S. Navy is investigating the design of the cicada to see if its efficient size v. projected volume of sound can be replicated for underwater sonar technology.

Homer wrote in The Iliad of, “the lily-voiced cicada,” leaving many people questioning what exactly is so soft and lily-like about a cicada. Perhaps he was referring to the trumpet shape of the flower.

In Plato’s Phaedrus, “The Nature of Speech,” he writes of a dialogue between Socrates and Phaedrus on the banks of a river beneath plane trees filled with singing cicadas. The two men find themselves unable to hear themselves over the sound of the bugs. Socrates launches into a tale of how the cicadas persist in their noisy vigil in order to entice the men into a midday, sleepy lull. Socrates insisted that he and his student continue their discourse and resist the urge to nap or else the cicadas would triumph. At one time, he says, cicadas used to be human until they became enchanted by Muses into singing and dancing so whole-heartedly and endlessly they neglected to eat or sleep and died of musical bliss. The Muses then immortalized them with the task of singing from birth to death with no need for sleep or food, daring all to resist succumbing to the lulling lure of their trill.

Cute story, Socrates, but I wonder if it’s the cicada’s lull as much as the heat and humidity index. Sometimes it’s not the bugs driving you buggy. Check out this story of a 1911 Heat Wave So Deadly It Drove People Insane.

Still, anyone enduring a blast of a cicada symphony may argue what will drive you up a tree more quickly—the heat or their noise, noise, NOISE. Finally, The Tale of the Cicada Who Helped a Guitarist Win a Music Competition:

As told by Professor of Classics Rory B. Egan at the University of Manitoba, classic Greek literature relays a story of a respected kithara player, Eunomos, who was competing in a music competition when the 5th string of his instrument, its highest-pitched string, broke. A helpful cicada appeared and hopped onto his kithara, filling in for the broken string with a sustain that rivaled a Gibson plugged into a Marshall amp cranked to 11. Eunomos, of course, walked away the winner.

PS:  Options available for a safe, natural and organic way to tackle a backyard cicada infestation.