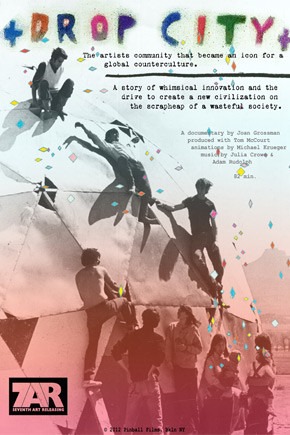 The film documentary Drop City, which features Julia Crowe’s guitar music in its soundtrack, will screen again this year in Istanbul on December 16th at the 2014 Istanbul Tasarım Bienali/2nd Istanbul Design Biennial, free of charge. The screening will take place at 19:30 at FilmTAK in Kadıköy, Tasarım Atölyesi Kadıköy, Telefon:
+90 216 418 52 98 // TAK, Rasimpaşa Mh., Duatepe Sk. No:61.

This year’s festival theme is “Gelecek Artık Eskisi Gibi Değil”/”The Future is Not What It Used To Be.”

The film is described as “a story of whimsical innovation and the drive to create a new civilization on the scrap heap of a wasteful society. Directed by Joan Grossman; produced with Tom McCourt, the film weaves together interviews with artists Gene & Jo Bernofsky, Clark Richert, Richard Kallweit, Carol & Charlie DiJulio, Steve & Holly Baer, John & Jill Curl and others founders of this community, who celebrated creative work and built housing structures entirely from scrap material based on Buckminster Fuller’s geodesic domes and the designs of Steve Baer, a pioneer in geometric structure and solar energy.

The documentary has previously screened at MoMA/PS1 in New York, The Barbican in London, the Bosch Art Film Festival in Amsterdam in addition to other major art museums and film festivals worldwide.

To purchase a personal DVD of this film, email [email protected] for information.