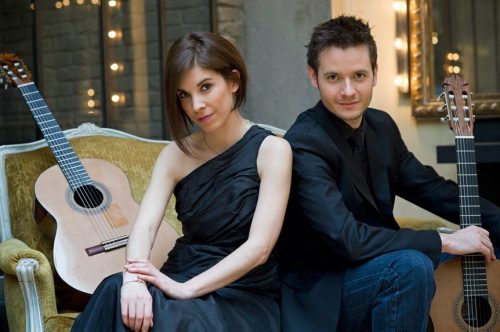 , have released their self-titled debut CD on the Calliope label featuring their beautiful recordings of works by Granados, Piazzolla, Scarlatti, Ginastera and Mompou.

“Frédérique and I met at the Ecole Normale de Musique de Paris in 2000,” Bibault says. “We were very young students at the time and she asked if I wanted to be her duo partner, which I accepted right away.

“At the beginning, we played only very small pieces because each one of us gave our priority to solo guitar studies. In 2006 we performed our first small concert as a duo. Then, in 2007, we had our very first concert as the Duo Résonances in Canada.

“Later we put again the duo effort aside to concentrate on our solo studies. In 2008 we studied as a duo with Alberto Vingiano in France. Only in late 2009 did we decide to give the idea of playing together real consideration. We officially became a professional duo in January 2010. As you can see it was not a very simple story. But I believe we had to live it this way in order to make the Duo Resonances what it is today.”

Frédérique Luzy, who grew up in the south of France, in Cabriès, a small village near Aix-en-Provence, initially had a desire to sing before she learned to play the guitar. “This was the dream I had since I was a little girl,” she says. “I started learning the guitar to accompany myself yet I did not realize that one year of learning the classical guitar with my first guitar teacher would set me onto an entirely different path.”

“The idea of playing in a duo was always very attractive to me,” she says. “I had played in trio formations, quartets, quintets, sextets but never in a duo. A duo is very different because you really need to be on the same wavelength and find a partner who shares the same ideas and feelings about music.”

The duo transcribed most of the pieces that are on their CD: Alberto Ginastera’s Suite de Danzas Criollas, Domenico Scarlatti’s Sonatas K308, K9, K430 and Enrique Granados’ Valses Poeticos.

“The Mompou pieces were transcribed by Carlo Marchione,” Bibault says. “He finished them while we were studying in Maastricht.”

Recorded at Studio Dada in Brussels, the duo used two DPA 4010 (4006 in pair) microphones and two Neumann TLM 170 microphones. “But the magic of the sound on the CD comes from our Artistic Director, Cécile Lenoir, who is an absolutely fantastic musician and sound producer,” Bibault says. “And I must add that the mixing and mastering process was made by another outstanding sound-producer, Thomas Vingtrinier, at the Sequenza Studios in Paris.”

The Duo Résonances experienced their first U.S. tour this past winter with a performance and masterclass for the Indianapolis Guitar Society and John Alvarado’s guitar class; a concert at Xavier University in Cincinnati and a masterclass at the Cincinnati Conservatory for Clare Calahan’s guitar class.

“I think the biggest difference observed between the guitarists of France and the U.S. is in the initial formation or early studies,” Bibault says, going on to explain, “In France there are state music schools or even conservatories in every city so people have access to learning music at a very affordable price. On the other hand, it is very difficult to become accepted to study your instrument at a higher studies level. In Maastricht, the situation was quite different since Carlo Marchione’s guitar class is in high demand with a very high technical level, with 23 students of 20 different nationalities. In the U.S., the level of musicianship we observed was really good, which is fantastic given the lack of initial formation. And I would say that U.S. students seem even more involved and passionate in their studies.”

The duo also had a brief chance to visit Chicago during their tour.   “We had only one day in Chicago, so we visited the Art Institute, which is an amazing and very beautiful museum,” Bibault says. “And then we visited the Willis Tower, where you can step inside those transparent cubes and feel as if you are inside a vacuum. The weather conditions were very bad, like -15F so we tried to spend most of our time inside buildings, which are amazingly heated in the U.S.”

“I’ve never been so cold in my life before!” says Luzy, “but trust me, I was very happy to live such a crazy experience and I have a great souvenir of it with many great photographs I took of unforgettable colors between the sky, snow and Lake Michigan.”

Duo Résonances is already planning their second U.S. tour for 2015.