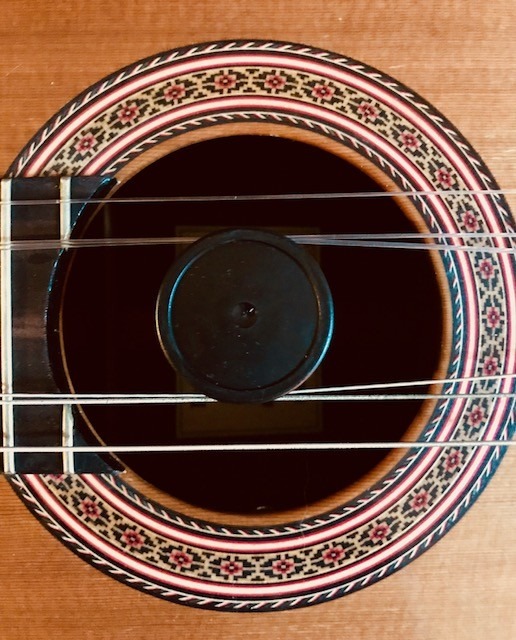 The heated, winter dryness in the air here in New York inspired me to collect advice from various luthiers on how to best maintain humidity in a guitar but, in truth, this is not a seasonal issue as much as one that requires year-round vigilance because humidity levels can vary in terms of location and weather patterns.  Too much dampness can be as just destructive to wood as dry air.

How times have changed: the DIY method I  made when I was younger to create a simple, homemade guitar humidifier involved  uncapping a small, plastic 35mm film canister, carefully drilling evenly-spaced .25” holes into its sides and stuffing a bit of dampened dish sponge inside the canister. You’d then cap the entire thing off and suspend it inside the guitar sound hole between the parted treble and bass strings, which held the canister securely in place.

Who shoots with real film anymore?  It’s not as common as it once was…  I’ve turned here toward five luthiers from around the world, those whose work I have written about at one point or another, to ask for their wise input and expert advice:

Los Angeles luthier Greg Brandt says, “It’s been very dry here after weeks and weeks of the Santa Anas. Usually, the Santa Ana winds last for a couple days but it has been weeks without rain, which is why we’ve had the fires that will not go out. There are cascading consequences for dryness. I keep my shop at 40% humidity. This is a good number to pay attention to. Most guitars are built in an environment of 40-50% humidity, depending on how well one can control their shop, humidity wise.

“When I teach people luthiery, I make a point of letting them know—no bracing in wet weather unless the humidity can accurately and efficiently be controlled indoors.  Everyone should also know that there isn’t a species of guitar-making wood out there that is more impervious than another when it comes to swings in humidity. Rosewood is not going to react to moisture or dryness any differently than spruce, for example.

“I can run the air-conditioning here during the summer months but it sucks the moisture out of a space. What I would recommend is to pick up a good hygrometer

that reads humidity. It may not be scientifically accurate but you can trust it in terms of gaining a reliable, consistent number, and then, from a relative point of view, if the humidity reading shifts one day from 35% to 20%, you know you will need to do something about it.

“I’ve had two clients who left their guitars sitting in a window during a rainstorm. Another client hung his guitar up inside the shower to humidify it and got water inside. When they brought in their guitars for repair, I saw mildew eating the protein in the hide glue. I think Dampits

are a wonder. Get a cello or a bass Dampit because it will really put some moisture back into a guitar. The cello and bass damp-its are about 1” or ¾” thick and a bit longer. Bob Taylor has a video about how he restored moisture to a dry guitar using a bundle of damp-its.

“The dangers of dryness is this–if the fingerboard shrinks too much, this can shrink and crack the top. The worst case is that the whole thing becomes loose, which is a death knell for the guitar.

Luthier Thomas Fredholm of Göteborg, Sweden says, “I am telling everyone to use the Oasis guitar humidifier. However, there seems to be a couple of new ones around. Martin recently introduced one that is supposed to be very good.

“Apart from using a guitar humidifier, I always suggest that everyone should have a humidifier pumping steam in the room, especially if they live in a dry area be, be it winter up north or in a desert, down south. Dry wood and wet wood both are a guitar maker’s nightmare. I have been lucky not to get into any real problems. A couple of bridges popped off my guitars in China, probably sold by my dealer to a real dry or humid part of the country. Most of us makers build the instruments in about 40-45% humidity, so usually, it is okay.”

Luthier John Ray of Granada, Spain, author of the book The Granada School of Guitar-Makers, says, “I do quite a bit of restoration and my main concern is that my work will stand up to the conditions that the instrument will be subjected to by its owner. If I work too dry then deformations might appear, whereas if I work with too much humidity, new cracks might open right beside the ones I just fixed.  Both building and repairing at the right humidity can help with these problems.”

Ekrem Uğurlu of Seren Violin in Istanbul says, “Guitars are strongly reactive to humidity and damp places and, if you live in a place that experiences extremes, you must protect the instrument by placing it inside its case in an environment of that is maintained at room temperature.   Wooden musical instruments are very much affected by both pollution and humidity, and there is a chance of this affecting the condition of the instrument. Take the precautions necessary to protect the life of the instrument.   It is best to have a humidifier on hand and, if necessary, a dehumidifier.” [Note to readers: my Turkish language skills are still progressing and what I love is the unexpected that happens in translation. For example, the Turkish word for toes, is, literally: “foot fingers.” What stumped me here initially was that the word for thick, polluted city air translates, literally, to…”espresso!”]

Aaron Green of The Spanish Guitar Workshop in Groton, Massachussetts says, “Regulating humidity is far and away the cheapest and best insurance package you can have for your instrument.  When physical changes to the guitar become noticeable in terms of action change, fret ends sticking out or cracks, it means the guitar has suffered an impact on its sound.  Guitars are fragile and, the better the guitar, the more fragile it often is.  While we tend to focus on too little humidity and its adverse effects, the opposite is also true.  Too much humidity can present problems as well.

“My favorite system for humidifying a guitar is the one made by D’Addario Planet Waves because: (1) You do not need to charge (add moisture) the system as you do with others. The packets it uses are sealed and effective until they become hard and crumbly.   Then you simply replace the packets.  This prevents all sorts of issues from over and under humidifying, as well as guarding against the danger of potential leaks; (2) Secondly, this system regulates the humidity in both directions. It adds or subtracts humidity to maintain a stable environment that is suitable for most guitars; (3) Lastly, this system is made of three packs, two for hanging inside the guitar and one for keeping inside the headstock area of the guitar case, which provides more ambient humidity control for the entire instrument.

“It is imperative to keep the guitar inside its case when using this system.   In an ideal world, one would simply control the humidity of the environment where the guitar is most often played by using a room humidifier and, in the case of summer months and/or tropical environments, dehumidification, of one form or another.  For someone who owns a large guitar collection, this is probably the ideal way to go, but it requires maintenance and a verifiably accurate humidity gauge, which is not as easily obtained as it sounds.  I buy my humidity gauges through scientific supply houses.

“As a luthier, I always give my clients what they need to know to care for their instruments.  As a restoration expert, a large amount of the repair and conservation work I do revolves around guitars that are cracked or have glue joints that have come undone and, often, this requires disassembly of the guitar. I stand by the statement that an ounce of prevention is worth a pound of cure. As a dealer of rare guitars, I advise that if people wish to resell an instrument without seeing a huge devaluation, cracks must be avoided at all costs.

“Early in my career, I worked as an in-house repairman for a shop that was contracted to provide repairs for a large guitar retail chain.  When I was assigned to the newest store in the Metro-west Boston area, the owner of the repair shop and I visited this new megastore to get the lay of the land.  We found their acoustic instrument room to be very nicely appointed and it featured a custom, in-room humidification system.  Evidently, to us, this system was not working.  The room was so dry it prompted both of us to remark to the store manager they’d better rectify the lack of humidity quickly.  We were told this humidification system had cost many thousands of dollars so therefore, he was certain it was working just fine.  The following week I returned to the shop to start my job and every single guitar in that store’s showroom had cracked, including some vintage Martins.  This transpired during this store’s very first opening week and there wasn’t one guitar in the entire place, acoustic or electric, that was in what I considered “salable” condition.  Suffice it to say, for me, this gig did not last long.

“Twice in my career I have had to restore guitars that suffered from an overabundance of humidity.  One of these was a guitar I had built. It split apart down the middle of the sides like a baked potato and all of its braces fell off. The owner was wondering what I had done wrong to build an instrument that would fall apart at the seams, literally and then some.  I learned that he ran his humidifier during the summer months as well as winter in a small room where he kept the guitar, and he lived in a coastal New England town.   So I had to basically build him a new guitar on the chassis of the old.   Lesson learned.

“Another client experienced the unfortunate problem of the common snake humidifier leaking without his being aware of it.  When he brought me the guitar, all the braces had come unglued and there was a bad case of mold inside.   The back had to be removed which is a big job, but it was salvageable, and the guitar went back together like it never happened, minus many thousands of dollars in work.”