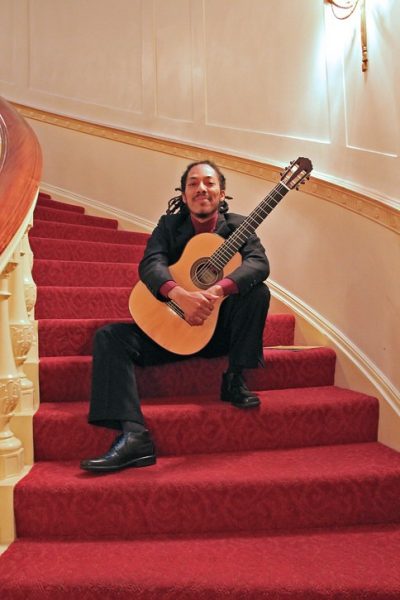 Guitarist João Luiz Rezende, one of the founders of the acclaimed Brasil Guitar Duo, presented a lecture at the 2018 New York Guitar Seminar at Mannes this past July on Brazilian rhythms. I’d missed the first half due to a migraine but managed to straggle in and jot down notes from the second half. We decided to meet later at my favorite outdoor office, a small park near the East Village, to discuss the rhythmical foundations of Brazilian music and clarify a few points from his talk.

For this article, I’m deviating from my usual to combine recorded conversation along with the written because there is much to enjoy in both city’s ambient racket and João’s explanations of various rhythms that words alone cannot fully capture.

A native of São Paulo, João Luiz Rezende designed the guitar curriculum and trained instructors for Guri Santa Marcelina, a music education initiative. He earned his Masters degree in classical guitar from the Mannes College of Music and his doctoral degree from the Manhattan School of Music. He teaches guitar at Hunter College in New York, where he serves as Director of Chamber Music, and he also heads the guitar department at SUNY Purchase.

As part of the Brasil Guitar Duo, he has performed with cellists Yo-Yo Ma and Carlos Prieto for the 2014 world premiere of El arco y la lira, a work for two cellos and two guitars written by the legendary Cuban composer, Leo Brouwer. The Brasil Guitar Duo also recorded Brouwer’s complete works for two guitars for the Naxos label, including the premiere of Brouwer’s Sonata de Los Viajeros, which earned the 2016 Latin Grammy for Best New Composition.

Origins of the Guitar in Brazil

“The Jesuits first brought the guitar to Brazil in the 1500s as a way of teaching the natives their language through songs,” João says. “In the 1800s, most people couldn’t afford a piano so they had a guitar. Also, they used to visit salons to hear performers who were more musically educated, and they subsequently adapted this music for guitar, with African slaves adding their own rhythmical elements. Eventually, the guitar showed up in Brazilian conservatories in the late 1940s. Prior to that, the guitar was considered mainly a street instrument, similar to flamenco guitar in Spain.

“The roots of Brazilian music derives from the modinha and Lundu,” Rezende says, “Modinha is a type of sentimental song with lyrics in Portuguese, and Lundu is a dance of African origin, which later became an urban song. Modinha comes from the word moda, which means, ‘song.’ The prominent instrument to accompany modinhas is, naturally, the guitar.”

“The modinha has melodic content similar to an Italian aria, and some of them have a syncopated rhythm. It is often very sad and nostalgic in tone, and it emerged during the latter part of the 18th Century into the early 19th century. You will hear the influence of the modinha in some of Villa-Lobos’s early songs for piano and voice.

“Why is it so sad and wistful? I think it is a cultural characteristic,” João speculates. “In my neighborhood in São Paulo, we were surrounded by families from Portugal. The grandparents of my friends spoke Portuguese from Portugal. My theory is they simply complain a lot. It’s also a very Catholic tradition to feel this burden, so this quality comes through in the music.”

João points out that some regions simply have a distinct character that winds up coloring their music, “For example, in Northeastern Brazil, there is a form of Mixolydian blues inspired by its miserable terrain. The baião and xote, which both have a very distinct rhythmic cell) share modal similarities with the American Blues. The people there depend on rain to make their crops grow yet it rarely rains. So their music is all about this struggle—‘Please god, we need rain for food.’

“Brazil never had racial segregation in the way the United States has experienced. People from all different races—Portuguese, native Indians and Africans–mixed right away, and it shows in the music and the food. With that being said, there are economic classes. People who could afford a private teacher and a piano played traditional European music and dances, and servants and workmen who overheard this music played at their employer’s house wished to play their own version of it. So they went home and played what they heard on the instruments they had, which was mostly guitars, cavaquinho, flutes and the trombone, adding their own adding their own accent and interpretation.

“The choro, which is considered to be the most authentic and sophisticated form of Brazilian instrumental music, developed as an appropriation of the polka, mazurkas and schottische by lower classes in Brazil,” João says. “At my lecture this summer at Mannes, I mentioned Chopin’s waltz as an example of European music because I felt it was something the students could grasp immediately but really, the choro has more influence from the old European dances like the polka and schottische, rather than Chopin.”

Identifying the Choro, Maxixe and Samba

The choro is 2/4 in time signature. The form choro is usually a Rondo (ABACA) but also ABA in structure. It is about people getting together and playing in what we call ‘roda’ in Brazil, which means circle. Also, it was mainly a form of instrumental music, with the flute, clarinet, guitar and a few percussion instruments. The mandolin came into popularity in the late 18th century, from the Neopolitan mandolin.

Back then, choro was considered a way of playing rather than a style. It is more the polka that inspired the choro. Another important thing to mention is that other genres, such as valsa and maxixe, can also be called choros.

When you hear conservatory-trained musicians, they play with a very clear tone, beautiful articulation and rhythmical accuracy. There is a European obsession with legato. Popular flautists in Brazil at that time were never trained in that kind of music, as their schooling came from street bands. They play the way they speak. This is why the choro form has these funny rhythmical accents.

So how do we identify the maxixe from samba and choro?

We can understand them all as coming from the same musical family tree. All three genres share the 2/4 meter, which is very common in most Brazilian dances, and two or more layers of syncopated rhythms. The first sambas, documented in the first decades of the 20th Century, were of moderate tempo. Compared to samba schools now, it has become extremely fast in tempo…like the rest of the world. The cadência or groove, the pace, was much slower, a walking pace, at least for the first 30 years of its existence. It is important to keep in mind that the streets in Rio were made of cobblestones, and some were muddy, too, so there was no way you could walk faster. The tempo was slower so you could walk and sing.

Maxixe is an urban dance that originated in Rio de Janeiro in the second half of the 19th Century. It is also in 2/4 meter. Many choros are, in fact, maxixes, especially the older ones written by Joaquin Antonio da Silva Calado and Irineu Batina, and the so-called Tango Brasileiro is a disguised maxixe. Some works of the great Ernesto Nazareth and sambas written by the composer Sinhô could fit into the maxixe category. They usually feature a more squared approach of the rhythmic cell, compared to the choros of Pixinguinha and, later of Jacob do Bandolim.

Because choro music is mainly instrumental, though there are lyrics for some choros, that is how you know it is the choro.

“I know this because I grew up playing choro and samba with older people coming into my house to play and sing,” João says, “but I also studied these rhythms because I wanted to know why and how they function so I could communicate it to others. There is an oral tradition—you hear an amazing player and then you go home and copy what you heard. Or, you jam with more experienced musicians and learn a lot that way, too. I felt it would be nice to know and do research. I read the books about these rhythms in order to be more systematic and not rely entirely on the oral tradition.”

João grew up listening to LPs and mixed tapes. “I played along with the record or mixed tapes to memorize it, and a lot of what I know about music comes from listening to the old recordings. I had to spend time obtaining the records, which was not easy. By contrast, the internet offers up too much information. It’s great, yet you can lose much time browsing. I play along and listen to what I enjoy most.”

Evolution of the Samba

“Most of the great composers who wrote waltzes in Brazil, wrote them in minor keys,” João says. “Why? Maybe they associate the minor mode with sadness and longing or saudade, as we call it in Portuguese, and there is an obvious influence from the modinha. For example, Carmargo Guarnieri’s and Mignone’s Valsas. Guarnieri wrote ten of them, and they’re all in the minor key—same with the twelve by Mignone. So you don’t dance the Brazilian waltz—you feel it. I was discussing this with a teacher recently because I was playing Villa-Lobos’ ‘Valsa’ from Suite Popular Brasiliera, and he wanted me to interpret it as a dance. But the Brasilian waltz is not a dance.

Variations of Accents  [Click hyperlinked text to listen, as it refused to embed!]

“Samba you already see documented before the first recording in 1917 of Ernesto dos Santos ‘Donga’s’ Pelo Telefone, which many books refer to as the first samba, but today we know that was not the case. There was samba in the late 19th century because newspapers were mentioning the world already.

“Modinha predates all of these genres. Villa-Lobos wrote some songs that are modinhas and some movements of his Bachianas Brasileiras make references to modinhas,” João says.

“How we see and understand samba today started at the beginning of the 20th Century, with the first recordings at that time that had a maxixe influence. After that, we have people gathering and marching—that is when we have the first school of samba, around 1928. Throughout the years, more instruments were added and the music changed. I noticed that regarding popular manifestations like samba, every 10 years, you see a change in the rhythm, instrumentation, tempo and social context.

If you would like to read more on this topic, João recommends the book, The Mystery of Samba, in English by Hermando Vianna.

“It’s a great introduction. What I like about this book is that he gives you the history in detail so you can research and pursue on your own. He gives the names of composers and instrumentalists along with the history of what was happening at that time. This is just one book. I am sure there are more out there that are in the process of being translated. I’ve read this one in both English and Portuguese, and it is a standout.”