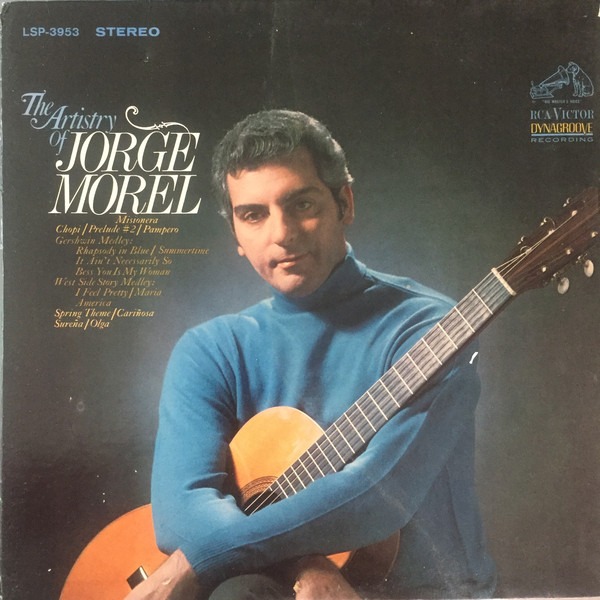 In memory of My First Guitar interviewee, the spectacular guitarist, arranger and composer, Jorge Morel, who died this past week at age 89 and is survived by his beloved daughter, Francesca.

Morel was a funny and soulful artist who always demonstrated a big, generous spirit and conveyed much joy whenever he spoke of his love for music. One of my favorite stories of his comes from a photograph he had blown up into a giant that hung his living room wall that showed him wearing a frilly evening concert dress, bow-tie and jacket, seated at a linen cloth covered dinner table beside owlish Andres Segovia, who was, by then up there in years. Jorge told me that he was more than pleased to conspire in fetching Segovia a secret platter of contraband “shrimps” on the sly, out of sight from Mrs. Segovia’s disapproving eye. Jorge happily obliged. “I mean, he was in his 90s. What’s a few shrimps at that point? You’ve got to live a little!”

Anyone who was lucky enough to drop by his old apartment in Queens would encounter an Alhambra-themed hallway filled with its tall, painted, Mooresque pillars and be welcomed to a seat at a tiny formica table inside his kitchen. There, you’d swapped guitar stories in the midst of preparing his late wife Olga’s Puerto Rican-style chicken with rice. His style of cooking was joyously haphazard, entirely by eyeball, a sprinkle of this and a hasty rummage through the fridge for a dollop of that. With New York kitchens being small, it turns into a kind of dance that involves dodging the swinging cupboard without losing the thread of conversation in the midst of endless glasses of red punctuated by a big fat scoop of Haagen Dazs ice cream.

Then, just as you might feel inclined to fall asleep like a dormouse, Morel dictated that you pull yourself together with a bracing cup of coffee to play the guitar for him in the living room, where an old-school street lamp that rewired for indoors gleamed more blindingly from one corner than any stage light. And this was when the party became lively because never have I encountered a more initially dauntingly up-close but enthusiastic audience, as usually Tony Acosta from Luthier Music and maybe another guitarist dropped by after his shop closed for the night. When the two of them started to exchange stories of decades ago-told-like-it-happened-yesterday, well then, I felt like an awestricken pipsqueak being for granted the opportunity to eavesdrop on another era of music as it used to be, once, long ago, in New York City, a raconteur’s version that managed, like photographers Berenice Abbott, Alfred Stieglitz and Hal Morey, to somehow capture a different palette of vibrant color and vividness of the city compared to its present day, in spite of being entirely in black-and-white.

He lives on in his music.