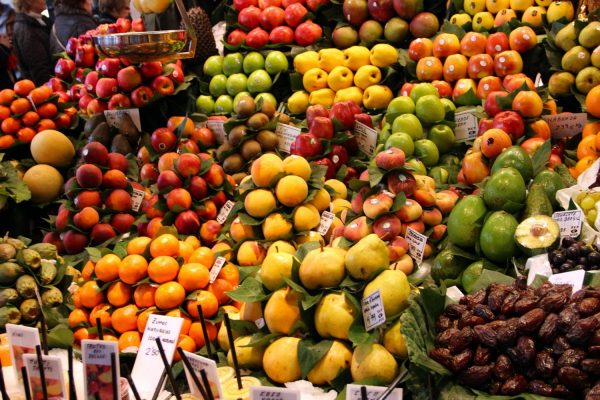 I was especially jet-lagged upon arriving in Barcelona after a 2-hour flight delay out of JFK due to poor weather conditions and glad to be staggering down Las Ramblas, squinting against the sunlight and taking in first sensory impressions. My first observation was that Amsterdam’s brightly cheerful cha-ching Bicycle Bell of Death, which renders the witless shitless and neatly out of the way within a Doppler-esque shave of .002 seconds, had entirely been replaced in Barcelona with a comparable but more impressively menacing vroom-vroom El Moto Engine Growl of Death.

It is fun to rrrroll the rrrrs here and succumb to saying things like, “rrrrambling along Las Ramblas,” a long street named from the ancient Arabic word ramla, which translates to “sandy riverbed.” At one time, a river flowed here from the Collserola to the sea along the city walls until it eventually filled in with demolished rubble of convents and monasteries during the 13th century.

Though this former riverbed had been filled with sewage eons ago, Las Ramblas is now engulfed in a fragrant haze for all the kiosks of flower markets where buckets of lilies, roses and carnations spilled forth brightly between futbol ticket kiosks, sweets vendors, and tourist postcard carousels.

I had been warned against pickpockets but maybe it was too bright and early in the morning for them.

Which brings us to La Boqueria, El Mercat de Sant Josep. I have to pause here a moment to explain the agony of being in a Spanish-speaking country for the first time about 20 years since I last spoke the language fluently. I was about to make a joke that, some days, I need a keyboard beneath my fingers to even be able to articulate myself in English, but then autocorrect just ruined it for me.

These first hours were like being dropped back into a dream of long ago familiarity with the spoken word clashing against the newness of the place as vocabulary and phrases dribbled back to me, at times in strange context.

So my first thought of La Boqueria was probably not unlike a child’s, la boca, mouth, which makes perfect sense for a supermarket but it isn’t. The La Boq part comes from la boc, the word for goat, which is the type of meat that was first traded here long ago, along with pigs and produce, in an open air market just outside the one of the gates of the old city walls.  (If you’re asking yourself at this point what any of this has to do with guitar, well, on occasion, guitarists do like to eat.)

The next time a New Yorker attempts to come up with a clever, zinging epithet for Gristedes, like “Grubby-stedes,” “Gray-stedes,” or “Gag-me-stedes,” they may need to consider the chain has not been in business as long as the Boqueria, since 1207.   Perhaps it takes 800 years to reach this standard of excellence, which I have to admit, went a little over my head.

At one of the 200 market stalls, which sell everything from meat to seafood to cheese, spices, fresh fruit juices and varying grades of acorn-fed Iberian ham, I became enraptured by the sight of an entire pyramid of large, glossy perfectly Eden-worthy, red fuji apples. I wanted one. I stood third in line after a woman who was nearly done purchasing two entire large sacks worth of produce with a bouquet of flat-leafed parsley swaying brightly out the top of one bag.

A middle-aged Spanish lady butted her way in front of me and assumed third position in line because some will do this if they think they can get away with it, I’ve since learned.   (Later in Madrid, I witnessed the same audacious stunt performed by someone’s sweet grandmother at the ticket window of El Prado until she shrank away under the laser-like heat of my friend Señor Larson’s well-practiced, withering glare.)

At the last minute, the lady who was nearly done shopping questioned a beautiful snow-white head of garlic she had just purchased. She handed it back to the vendor, who peeled it vigorously and revealed to her the perfectly pink and purple-hued cloves inside. This demonstration restored affable smiles all around. I’d wondered what all the fuss was about.

The next customer, an elderly man in a woolen cap, asked to inspect a hand of bananas. The vendor grasped a pole and nimbly lowered the perfectly yellow and unspotted bunch he’d pointed to. With great apology, she explained that these bananas were imported from Colombia and unfortunately, they were the only ones she had.

He muttered and waggled his hand in refusal but she was already putting them back because she had guessed as much.

What was wrong with them?! What was wrong with Colombian bananas that I didn’t know about? Señor Larson’s unflappable, matter-of-fact explanation for me later would be: “Spaniards obtain their bananas from the Canary Islands. That’s why.”

But I didn’t know this at the time. Witnessing all this incomprehensible foodie perfection was making me sag inwardly. It also dawned on me I could be standing here all day in exasperation for a single fuji apple when a perfect head of garlic and a bunch of bananas already met with customer hesitation after twelve excruciating minutes.   And this elderly gentleman was only getting started with his shopping. Blame my impatience on jet lag. I do know the difference between ripe,  unripe and nearly ripe, bruised, waxed and sprayed but I felt this level of pickiness about produce—you know, stuff that cannot help itself because it grew that way out of the ground or was plucked off a tree–was somehow baffling, possibly profound if not downright insane.

I’d thought New Yorkers were particularly exacting about the precise thinness of their prosciutto slices at the deli counter.   Well, they have nothing on Spaniards shopping at La Boqueria.

I confess I left foodie heaven for the nearby Carrefour “Express,” where 2 liters of water comes out to .50-cents USD or .55-cents USD if you’re willing to pay an extra nickel for a plastic bag. They have nice fuji apples there, too, but they’re jumbled inside plastic crates instead gleaming sculpturally in perfect pyramids.

The travel guides will not list it because it’s not half as pretty. But you can steal my nickname for it, if you like…

Recommended reading: The Food of Spain

and Boqueria:  A Cookbook, from Barcelona to New York.