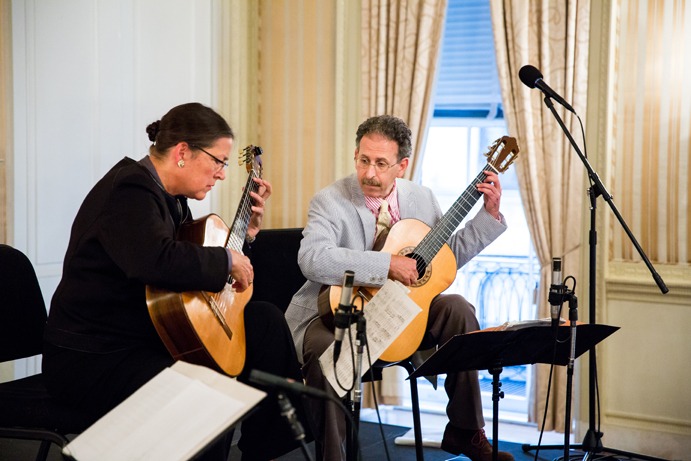 The seminar, now in its 18th year, offers 4 intensive days of master classes, guest artist forums, evening faculty concerts and a morning open stage for participants, culminating in a solo and ensemble participants’ concert, which this year, featured a Word Premiere of Luiz’ Frutas Do Brasil.

A quiet shuffle of nearly 100 audience members filled the classical Salon Simón Bolivar inside The Americas Society’s landmarked, neo-federal style townhouse on Manhattan’s Upper East Side. And in the heat of linden-blooming late June, everyone fanned themselves with their concert programs beneath a ceiling festooned with plaster garlands and painted cherubs as the Newman & Oltman Guitar Duo plucked a sultry palette of Lo que vendrá by Piazzolla, Raritan Triptych by Paul Moravec, Passatempo by Pixinguinha, Imagens do Nordeste by Celso Machado, Chora coração by Jobim, Chorinho das comadres by Simas and The Last Song by Clarice Assad.

Luiz heads the classical guitar program at the Conservatory of Music at Purchase College and is a founding member of the Brasil Guitar Duo. He trains instructors for a music education initiative for children in Guri Santa Marcelina in São Paulo.

In a deeply moving moment after the concert, Michael Newman presented guitar seminar participant Bill Braunstein with an engraved placard in honor of his unwavering support of the event. Braunstein, the guitar seminar’s oldest student at age 87, has attended all 18 seminars with his beloved Fleta guitar in hand and the enthusiasm of a 20-year-old, reminding us all of how music washes all in Ponce de León’s Fountain of Youth.

Please visit here for more information on The New York Guitar Seminar at Mannes and The Metlife Foundation Music of the Americas Concert Series.


Share on Facebook Share
0
Share on TwitterTweet
Send email Mail
0
Total Shares
The Guitar participates in several affiliate programs designed to provide a means for sites to earn commissions by linking to music-themed discounts, products, books and other services that may be of value to the reader. Whenever you make a purchase from a link on these pages, it means I receive a small percentage of the price. This helps to offset the cost of what it takes to maintain The Guitar, and is greatly appreciated.