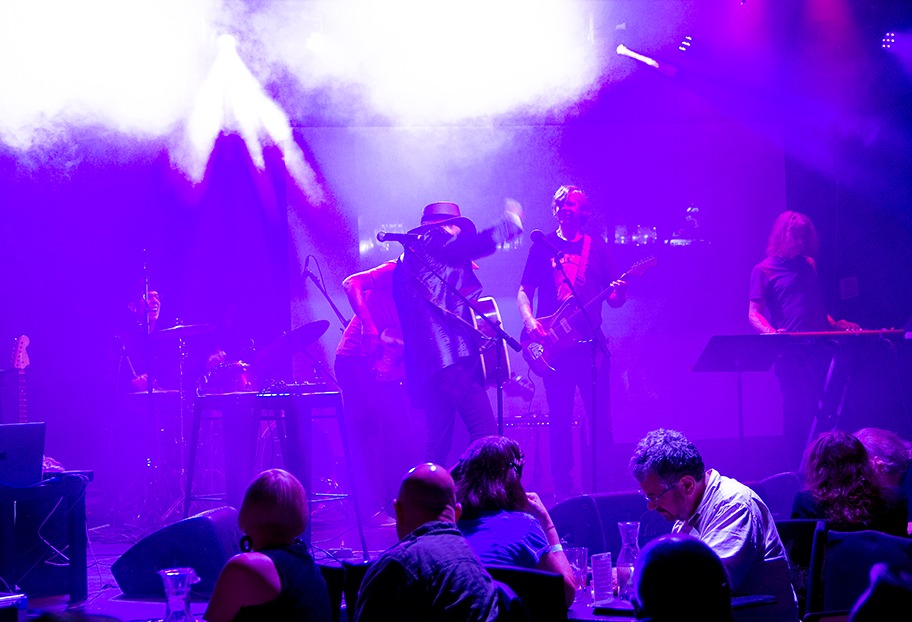 This past Saturday, September 11th, Gary Lucas and Gods & Monsters performed a memorable 40th Anniversary Concert to at Poisson Rouge (in the former Village Gate location) with a variety of guest artists, which included Richard Dworkin on drums, Ernie Brooks on bass, guitarist Thurston Moore, singers Felice Rosser, Richard Barone and Emily Duff with Jerry Harrison and Jason Candler on keyboards. It was a perfectly beautiful evening, acknowledged to be the 20th Anniversary of 9/11 in the city, and it felt good to own that date with the band’s first reappearance since the beginning of the pandemic. With audience members both seated and standing, everyone showed proof of vaccination for entry.

Lucas launched the show with his “Rise Up to Be,” the scintillating guitar instrumental that serves as the foundation for his and Jeff Buckley’s song, “Grace.” Looming onscreen in the background was a fantastic retrospective slide show featuring various snapshots of Lucas with friends and the band’s career highlights mixed in with some psychedelic graphics and looping roller coaster footage that conveyed all the wild, rocked out twists and turns of the music. What follows is a small feast of photos from the evening in full color:

This site uses Akismet to reduce spam. Learn how your comment data is processed.