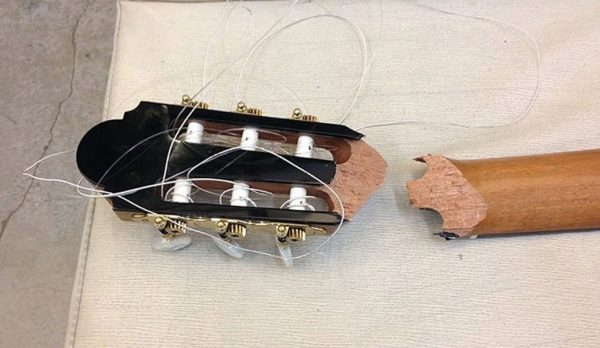 As a well-traveled concert guitarist and department chair at the University of Wisconsin at Milwaukee’s guitar program, Izquierdo had taken the proper precautions of de-tuning the instrument and supporting the guitar’s headstock with bubble wrap inside an Accord flight case. Hong Kong Airlines personnel did not allow him to board the plane with the instrument and required him to gate check it in spite of the generous space readily available in the overhead compartments. When Izquierdo arrived in Taipei, he discovered the guitar’s headstock was entirely broken off. This guitar had been specially made for him by luthier Antonio Marin Montero of Granada, Spain, using old panels of spruce wood given to Izquierdo by guitar maker Federico Sheppard. The guitar was completed at the end of June 2013 and, shockingly, the damage occurred less than three months later.

“It’s a great guitar to begin with so the repair was successful,” Bruné says. “Marin, whose studio is in Granada, Spain, started building guitars as an apprentice in Eduardo Ferrer’s shop in Madrid when he was a teenager. He went on to collaborate with French maker, Robert Bouchet, whose guitars were performed by the Presti-Lagoya Duo. “Classical guitar headstocks are grafted onto the neck at an angle. The glue joint did not fail—the wood around it is what shattered because this guitar broke so violently,” Bruné says. “I told Rene, do not try to fit the headstock back onto the guitar to see if it will be reparable or, worse, attempt a “temporary” (no such thing) repair. Find every little shard and put it inside a ziplock bag and then wrap the headstock and neck inside bubble pack to protect the damaged ends.

“We can fix this—we’ve done many of these repairs. In fact, a month earlier I had another Antonio Marin guitar, dating from 1968 from his early years with the same exact injury because the guitar had fallen off a chair. What I do is take all the pieces, lay them out, and try to imagine in reverse how the thing came apart. Then I put it back together in reverse order. “Usually, these are partial breaks. In the case of Rene’s guitar, it was completely broken off. Once I got the headstock glued on in proper order, I then removed the head veneers down to the wood part and put on all-new ebony veneers, trimmed to the slots and shape of the head. Then I varnished it. I used hot hide glue—that is the secret. You cannot use synthetic glue for this kind of repair. If you use hot hide glue, it is stronger than the wood itself and then the repair also becomes invisible. The glue line will never telegraph itself.

“Hot hide glue withstands string tension. It’s basically a gelatin, a very strong version made of animal protein. The strongest grade is called flaking glue. You know that type of opaque glass used in restroom doors that is textured to let the light in? That is made with hide glue. The glass-makers put the glue onto the glass, where it grips the surface of the glass and contracts it, creating the rippled effect. We don’t use that grade of glue for the guitar but that is an idea of how strong it is. Also, every time you heat and reheat hide glue, it lessens in strength. “Because I replicated the head veneers of this guitar to make it look like the original, it took me approximately 9-10 hours of labor and that includes all the finish and touch-up on the French polish. Marin did send me back a very nice email in response to the photos. I wasn’t expecting to hear from him. “I actually saw the guitar again about a month ago. Rene dropped by the shop and I looked at the guitar to check it over. It’s still perfect. You literally cannot see that it was ever broken at all. I sent a photograph along to Antonio to show him that his guitars are respected. He is in his 80s and I thought he would get a kick out of seeing that his guitars are deeply appreciated.

“How did Rene’s guitar break? It suffered a tremendous shock. My theory is, though he had it housed inside an Accord flight case with a case cover, with the headstock wrapped and immobilized, the baggage handlers, in the process of pulling it out, might have had it on top of the cart to make room for more square, easily loadable suitcases. Possibly, they forgot the guitar was on top when they pulled the cart. The thing jerked and the guitar tumbled from the very top. I don’t know. I’m just speculating. Maybe it slipped off the top of a conveyor belt that goes all the way up to the cargo door. It had quite a fall.

“People always ask me what’s the use of an airline-proof case? I’m sorry, there is no such thing as an airline-proof case! That’s the way it is. I know cellists who had necks broken on their cellos when they gate-checked them. Maybe turbulence inside the plane broke it. I always tell people when they are traveling with a guitar, they have to assume the guitar in the case is going to be dropped and thrown as far as a grown man can drop and throw.

“Most guitarists seem to be under the illusion that the best cases are the ones that are crush-proof so you see all these online demonstration videos where someone stands on the case to show it is the most durable. The best cases, in my experience, have the most padding and treat the guitar like an egg that is about to be dropped off the Empire State Building. Rarely does a guitar become damaged by the case getting crushed as much as damage occurs from the guitar undergoing shock.”

As a coda to this story, Hong Kong Airlines paid for the guitar’s repair and gave Izquierdo tickets for two complimentary flights, which he donated to the Yale University Chapter in Taipei. Below is a youtube video of Rene Izquierdo performing Cuban Danzas on the Marin guitar at Magidol University in Bangkok, Thailand.

Richard Bruné is a featured interviewee in My First Guitar: Tales of True Love and Lost Chords (ECW Press).

Bah! It's a pop-up asking for your email! Get the fly swatter! If you like this article, please subscribe... (Your email will not be spammed or sold.)

Thank you!! Your subscription is much appreciated!
No, Thanks Let me see the website.
Share on Facebook Share
0
Share on TwitterTweet
Send email Mail
0
Total Shares
The Guitar participates in several affiliate programs designed to provide a means for sites to earn commissions by linking to music-themed discounts, products, books and other services that may be of value to the reader. Whenever you make a purchase from a link on these pages, it means I receive a small percentage of the price. This helps to offset the cost of what it takes to maintain The Guitar, and is greatly appreciated.