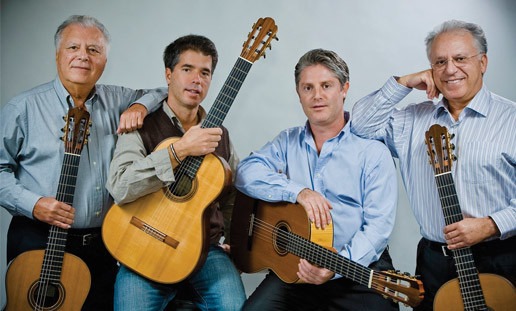 performed late October in the 2014-15 season of the 92nd Street Y’s Art of the Guitar series. Pepe Romero and Celin Romero, sons of the legendary guitarist Celedonio, were joined by the third generation of Romeros, grandsons, Celino and Lito.

The Romero family has been at the forefront of classical guitar for decades. Celedonio Romero, the colorful patriarch of the clan, performed as a 14 year old for Miguel Llobet, student of guitar legend Francisco Tárrega, and went on to study with composer Joaquín Turina at the Madrid Royal Conservatory. While there, Celedonio spent his off hours hanging out in cafes with painter Salvador Dali and poet Federico García Lorca. During the Franco regime, Celedonio was not permitted to give concerts abroad but, in the late 1950s, he managed to secure a set of American visas and escaped with his family to the U.S. , where he formed a guitar quartet with his three sons.

Celedonio and those sons Pepe, Angel and Celin went on to perform with nearly every major symphony orchestra in the world, as well as several television programs, including “The Tonight Show” and “The Ed Sullivan Show.”   The quartet also gave private concerts for luminaries such as Pope John Paul II, King Juan Carlos I and Queen Sofia of Spain, Prince Charles and for two state dinners at the White House. Celedonio received knighthood from King Juan Carlos, along with the Comendador de Número de la Orden de Isabel la Católica, a tribute bestowed centuries ago upon honored recipients since the 1500s. Angel Romero launched his career as a conductor in the early 1990s and Celedonio died in 1996 at age 83, leaving a considerable legacy of his own compositions, along with his sons and grandsons who carry on his devotion to the guitar.

The Romeros performed a feast of Spanish music in a recent concert at the 92nd Street Y which included several of their father’s pieces. The quartet, performing entirely upon cedar-topped guitars, opened with Preludio from La Revoltosa (arr. Lorenzo Palomo) by Ruperto Chapíy Lorente. This piece falls into the Spanish genre of the género chico or “little genre,” a brief and often farcical popular music theatre play. This particular prelude offers a spry rhythmical interpretation of a tale about a contentious couple brought to reason and reunited affection with a little help from their neighbors.

Pepe and Celino Romero performed a duo of Tonadilla for Two Guitars by Joaquín Rodrigo, a piece originally written for the Presti-Lagoya duo. The music offers a beautiful interplay between two guitars with rhythm and melody conveying a more contemporary inflection to traditional Spanish motifs.

All the Romeros returned to perform Introduction and Fandango from Quintet for Guitar and Strings No. 4 in D major, G.448 Fandango by Luigi Boccherini (arr. Pepe Romero). Though Italian, Boccherini moved to Spain and lived there through the end of his life. The piece initially sounds reminiscent of Vivaldi’s Concerto in D Major but takes a more dazzling, spirited turn with its unfolding melody.

The Romeros opened the second half of their concert with the wildly dramatic Miller’s Dance from The Three-Cornered Hat by Manuel de Falla (arr. by Pepe Romero), with percussion tapped along the side of one guitar for de Falla’s Danza Española No. 1 from La vida breve (arr. Pepe Romero).

Celin Romero performed Villa-Lobos’ popular Preludes No. 3 and No. 1, a seeming deviation to the all-Spanish repertoire of the evening, though Villa-Lobos wrote his Five Preludes for Andrés Segovia. Celino and Lito Romero performed together, as a duo, Catalonian composer Enrique Granados’ No. 5 “Andaluza” from his Danza españolas, evocative of sweeping shawls and swirling dancers.

The quartet remains as beloved as ever, not just for their stature and history but for the infectious joy and spirit they still continue to share with their audience.